Broken Sex Doll opened last week at the York Theatre! This must-see, sci-fi musical sex comedy will be running until Saturday, November 22 and has been a hit with critics and fans alike (CLICK HERE FOR REVIEWS). Don’t miss your chance to catch this hilarious production before it heads out on tour again.

Here are some photos from our opening night (taken by one of our volunteer photographers, Wendy D) on November 12. A big congratulations to The Virtual Stage’s whole team!

The crowd gathers anxiously for the opening night show!

The cast take a musical bow, concluding the performance

Some excited patrons at the reception

Some young patrons at the reception

Greg Armstrong-Morris with some friends

One of our lovely volunteers, Jenn McKeown with Lindsey Shepek and Neezar (The King in Broken Sex Doll)

Broken Sex Doll runs until November 22 at the York Theatre. Tickets from $19 and are available on our website or by calling the box office at 604.251.1363.

It’s that time of  year again – Jessie Award season! The nominations for the 32nd annual Jessie Richardson Awards were announced this week, and four productions from our 13/14 season have been nominated! The Jessie Awards celebrate and promote the outstanding achievements of the Vancouver professional theatre community. Congratulations to all the nominees, we can’t wait to hear the results! The shows from our 13/14 season that got nominated are listed below in their respective categories.

Whose Life Is It Anyway? – Realwheels Theatre

Outstanding Performance by an Actor in a Lead Role – Small Theatre
Bob Frazer, Whose Life Is It Anyway?, Realwheels Theatre

Outstanding Performance by and Actress in a Supporting Role – Small Theatre
Jennifer Lines, Whose Life Is It Anyway?, Realwheels Theatre

Outstanding Direction – Small Theatre
John Cooper, Whose Life Is It Anyway?, Realwheels Theatre
Richard Wolfe, Inside The Seed, Up in the Air Theatre

Inside The Seed – Up in the Air Theatre

Outstanding Production – Small Theatre
Inside The Seed, Up in the Air Theatre
Whose Life Is It Anyway?, Realwheels Theatre

Significant Artistic Achievement – Small Theatre
Inside The Seed, Up in the Air Theatre

Outstanding Original Script
Jason Rothery, Inside The Seed, Up in the Air Theatre

To see a full list of the nominations, visit the Jessies website. The awards ceremony will take place on Monday, June 23 at the Commodore Ballroom. For tickets, click here.

This writer, director, producer and set-designer is so loved by The Cultch he needs no introduction. From his 2011 dramatic hit 1984 to the smash hit Broken Sex Doll currently wowing audiences on The Cultch stage, Andy Thompson of Vancouver’s The Virtual Stage shares his creative process behind Broken Sex Doll, or as The Province reviewer Jerry Wasserman likes to call it: “The biggest hit of the season and maybe the Next Big Thing in Canadian theatre!” We recently caught up with Andy Thompson to talk about producing his new feature length feature.

SC: The last time you were at The Cultch you enjoyed enormous success with 1984. How does it feel to be back in the historic theatre with Broken Sex Doll?

AT: It’s a tremendous honour, of course, to have been invited back to The Cultch!  The venue is so intrinsically awesome, the acoustics are amazing, it has such history and The Cultch’s team is so friendly and helpful.  It’s really a great place to work.

SC: You’ve been successful in staging both dramas and comedies. Which do you prefer?

AT: Ha, that’s a funny question. Well I certainly had my fill of “doom and gloom” with No Exit (set in hell) and 1984 (set in a hellish totalitarian state). Broken Sex Doll is certainly a fun and much-needed bounce back into the realm of comedy and laughter. I think I’ve had my quota of producing dark works filled for the time-being!  I’m really excited about doing more comedy.  Letting “fun” be my guide—for myself and the audience alike—in my last two shows (I’m including The Zombie Syndrome here) has been a tremendous value in my work recently.  It gives me a bounce in my step and a warmth in my heart that I’d like to continue to nurture. 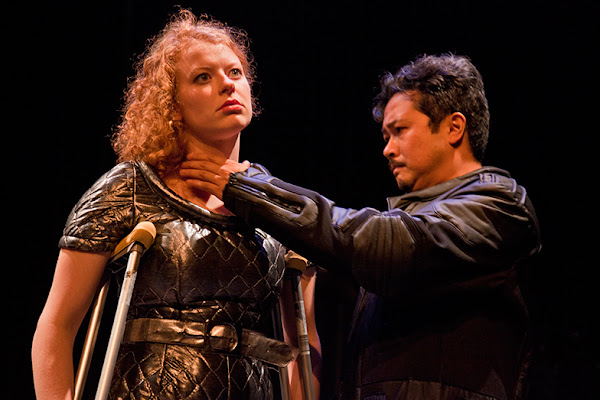 A shot of the original one act version of Broken Sex Doll. Photos by Bettina Strauss

SC: This production was originally created in the fall of 2011 for Theatre Under the Gun. Can you talk a bit about the evolution of this production?

AT: It’s been quite a journey.  The original was created and performed in only 5 days, so there was little time to work detailed back stories. For this version, I dove headfirst into character arcs and backgrounds and the end result was this “new, full-length” version of the show.  It is now functioning as a sort of sequel to the original.  The original told the story of how Ginger gets tossed out in the first place.  This new version tells the story of what happens after she’s dumped… at the dump.

SC: What have been the challenges in adapting the original 20 minute performance into a full-length production?

AT: Well the first challenge was turning it into a full-length script and all that comes with that process.  Once that was more or less accomplished, then the challenge of producing a large-scale theatre piece then emerged.  Finding a way to make the show as “big” as possible (it “wants” to be a big show) on our fairly limited resources was also quite challenging.  But we were really blessed with angels on this show, such as with our Technical Director Duncan MacCallum, who poured his heart and soul into the set build.  He is just one example, though.  This production, much like the inaugural production of No Exit (which we co-produced with Electric Company Theatre at the Centre for Digital Media a few years ago) is a real example of members of our community coming together in a united cause that they all believe in.  It’s been quite a magical process.  And everyone at The Cultch has been so incredibly welcoming and supportive.

SC: Can you talk about the collaborative process working with musical composer Anton Lipovetsky?

AT: I approached Anton almost a year ago.  After he agreed to come on board to write the music for about ten songs, we had some working sessions together.  In a “sesh” we would just hang out, have tea or coffee and snacks, riff on ideas and sing together.  I wrote the lyrics and he wrote the music.  Occasionally I had musical ideas or Anton had lyric ideas, but the roles generally fell cleanly along those lines, so that is how it’s credited.  It was a lot of fun.  We each listened to one another quite a bit and respected the opinion of the other, so it was a really healthy and productive working relationship.

We then had a workshop in August 2012 sponsored by The Cultch in its Culture Lab.  That workshop was instrumental in the development of the show.  I am so grateful for Heather Redfern for allowing us to hang out for that critical week and work on the piece in that facility.  We worked on music, the script and choreography.  The developmental process that summer was crucial to the show’s later success.

After that week in August, Anton and I continued to have lengthy “song sessions” hammering out more music and lyrics.  It was very positive and synergetic and resulted in the very diverse, eclectic musical score that is now so critical to the piece’s success.  And it has over 15 or so songs: much more than Anton came on board for.  Ha ha!  It should also be noted that one song, Rise and Shine is actually the creation of Neezar, who plays The King.  He is a songwriter in his own right and had that song in his repertoire.  I loved it for the show and he agreed to loan it to the production for the top of Act Two. Anton tweaked it a bit to blend into the overall sound and the end result works well, I think. 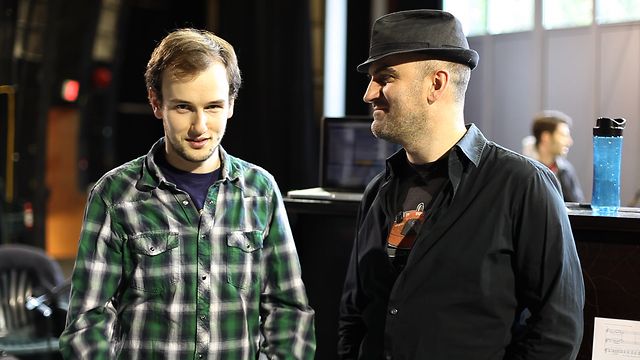 SC: What are some of the challenges in writing and staging a musical in comparison to a play?

AT: Well a musical of course requires choreography, so I had to get that sorted out.  Jane Osborne and Vanessa Goodman of The Contingency Plan have been on board  Broken Sex Doll essentially from day one of the original piece.  They are amazing, lovely, incredibly talented artists.  I am so grateful for everything they brought to the show. As a producer I had to make sure to give them the time they needed to choreograph numbers with the cast, so that was a bit of a balancing act.  But it all worked out.  The movement is great and really supports and enhances the storytelling.

This production also marks my first time working with lav mics.  We couldn’t afford a live band, so Anton arranged and recorded pre-recorded tracks that the cast sings live to.  They are mixed in the tech booth with the lav-captured live vocal performances.  This was something Anton and I were willing to do, artistically (not just for financial reasons) it made sense in a “sci-fi musical” that the music would be pre-recorded and effects heavy.  In future productions, producers could go with a live band, or license Anton’s tracks and use them instead.  It’s pretty cool.