Dear friend of The Cultch,

We need your support!

This December, The Cultch will open the newly renovated York Theatre. The theatre will be an invaluable community resource that will revitalize the north corridor of Commercial Drive between Venables and Hasting Streets and bring live performance to the Commerical Drive neighbourhood.

Following in the tradition of the naming of other heritage buildings such as the “Stanley Industrial Alliance Stage,” The Cultch would like to name the stage of the York Theatre and put signage on the exterior of the building that includes the name of its sponsor. The significant funds raised from this naming are essential in ensuring The York and The Cultch are financially healthy, stable, and sustainable both now and in the future.

We’re inviting Cultch supporters, neighbours, and artists to join us in showing your support for The Cultch, the York Theatre, and the sustainability of arts in this community!

What: An open house held by the City of Vancouver to review our signage proposal and receive community feedback.There will be pictures of the proposed signs and Cultch representatives and City staff available to answer your questions. There will also be an opportunity to fill out a survey. Please feel free to stop by any time during the course of the open house.

Please do not hesitate to contact me at 604.251.1766 or heather@thecultch.com, if you have any questions or would like to chat further.

Thank you so much for your ongoing support of The Cultch and the new York Theatre!

On January 30, as part of the 2013 PuSh International Performing Arts Festival, UK playwright and performer Tim Crouch brings his latest production, I, Malvolio, to The Cultch. A celebrated international performer, Crouch has developed a large following here in Vancouver, thanks to past visits performing My Arm and An Oak Tree in 2007, and ENGLAND in 2009. 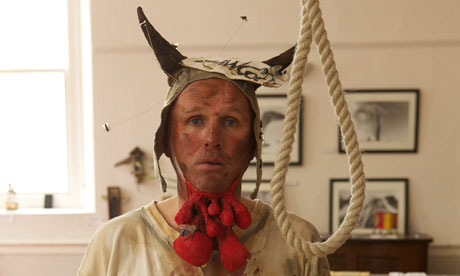 I, Malvolio opens at The Cultch Jan 30

For I, Malvolio, Crouch uses humour as a means of exposing the harm caused in bullying and practical jokes in a re-imagined version of Shakespeare’s famous play Twelfth Night. In this version of the classic tale, the story is told through the eyes of the pompous steward Malvolio, a perspective rarely seen and explored in theatre. In Shakespeare’s Twelfth Night, Malvolio is bullied and picked on by the other characters, ultimately winding up as the crux of a hurtful joke. In the end, poor Malvolio meets a pitiful demise when he’s written off as insane, and locked away in a dark chamber. In his final words he pledges revenge on the other characters for treating him so poorly. I, Malvolio is a charged, hilarious and sometimes unsettling rant from a man adrift in front of a cruel audience

In this version of the play, Crouch’s clever script gives audiences a unique position from which to view the issue of bullying – from the eyes of the bully. As Crouch explains in the video below, “It’s a very funny piece. He is a clown and we often enjoy laughing at people who are going through terrible situations and circumstances. Malvolio is really at the bottom of the pile and he encourages you laughing at him, and then he challenges you for laughing at him.”

It’s a performance that makes you wonder: what’s acceptable about laughing at someone who’s been broken down and humiliated? As Crouch puts it in this interview with journalist Mark Fisher, “It [the play] is about how far one is prepared to take pleasure in somebody’s cruelty to other people.”

I, Malvolio is an entertaining production that reinforces valuable lessons along the way. Don’t miss your chance to see this contemporary spin on a classic play!

In partnership with The Cultch, West Coast LEAF is delighted to be offering a fundraiser performance of Miriam Margolyes’ play, Dickens’ Women on Wednesday, November 14 at 7pm.
West Coast LEAF is a BC-based non-profit society on a mission to change historic patterns of discrimination against women through three key areas: Public Legal Education, Law Reform, and Equal Rights Litigation. They offer programming in each of these key areas, including peer facilitated workshops like ‘No Means No’ , the Family Law Project, and litigation in specific cases that have the potential to affect the lives of women across BC. This really just scratches the surface of the hard work that West Coast LEAF does for women in our community and across BC. We are proud to have partnered with such an inspiring organisation!

A veteran of stage and screen, award-winning actress Miriam Margolyes has achieved success on both sides of the Atlantic

As for Miriam Margolyes, you may remember her from any one of her amazingly talented and oft hilarious performances in films, plays, and TV series’ such as The Black Adder, Little Shop of Horrors, Magnolia, The Vagina Monologues, Being Julia, Romeo + Juliet, and the list goes on! In Dickens’ Women she moves seamlessly from role to role depicting 23 of Dickens’ little to best known characters whom, full of life and layers, were shaped from women in his own life – women he knew, women he loved, and women he hated.

The Cultch is thrilled to be presenting Dickens’ Women from November 15 – December 1 (in addition to the November 14 fundraiser performance for West Coast LEAF) considering the combined talent and strength brought to this hilariously entertaining one-woman performance, co-written and performed by BAFTA and LA Critics Circle award-winner Miriam Margolyes. Equally exciting is that this performance Dickens’ Women is Margolyes’ Canadian premier on a critically acclaimed world tour where Dickens’ Women has been eliciting much praise from audience members and critics alike in countries including Australia, New Zealand, India and the USA.

Don’t miss out on an opportunity to support an exceptional, BC-based organisation and see the Canadian premier of Dickens’ Women as they continue on their critically acclaimed world tour!

Tickets are available at The Cultch for both the West Coast LEAF Fundraiser and the Nov 15 – Dec 1 run of Dickens’ Women. Tickets can be purchased online at tickets.thecultch.com, by phone at 604.251.1363, or in person at 1895 Venables Street.

The annual Volunteer Appreciation BBQ is a highly anticipated event in the life of The Cultch. It’s the day at the end of the season when Cultch staff get to hone their chopping skills on salad fixings and burger toppings. It’s the day that no one comes between our Marketing Manager and her role as ‘Queen of the Grill’. It’s the day when the Weather Network is the only channel worth watching. Most importantly, it’s the day we get to say thank you to everyone who has graciously given of their time and energy to make The Cultch such a vibrant community venue.

On June 2nd, we honoured the 120+ volunteers who gave their time to usher at performances throughout the past year and provided valuable administrative support in our office, as well as the numerous volunteer interns who worked in our marketing, youth and development departments. More than 3700 volunteer hours were contributed in total for the 2011/2012 season!

Lisa Snider with Jenn Graham and Rebecca Sharma, with the moody BBQ grill

And while the weather was a bit cooler than we’d hoped, it didn’t stop the volunteers who attended from having a fun afternoon! Guests were treated to a BBQ spread courtesy of Choices Markets in Yaletown and a plethora of prizes donated by local businesses on The Drive and numerous Cultch supporters. After the ‘Name Tag Follies’, some mingling, and a helping (or three) of tiramisu gelato, we asked one volunteer to share his memories of working at The Cultch.

A heartfelt thanks to our amazing volunteers for making our 11/12 Season a smashing success!

Jack Vickery, our 12 year-old Volunteer Extraordinaire at The Cultch

How long have you been a volunteer at The Cultch?
Approximately 12 years. I started during the Jazz Festival in 2000.

What’s been your funniest/most amazing/weirdest moment volunteering at The Cultch?
There have been many. The one that comes up for me was the first night of the Shane Koyczan show in the Historic Theatre. Best. Rock. Concert. Ever.

What keeps you coming back to volunteer at The Cultch?
The shows, the staff, the volunteers. I have made some great friends here. And see some amazing shows. Helping the audience enjoy their evening is also fulfilling and many of them have become familiar faces.

Did you have a veggie burger or beef burger at the BBQ?
Beef

Did you win a door prize at the BBQ?
Yes I did! Two tickets to the Vancouver Aquarium.

Did you meet any new people at the BBQ?
Yep, and renewed connections with many others, including volunteers and staff.

Craziest thing you’ve ever done?
Hmmmmm . . . I will pass on this question (Jenn likes to say I have a sordid past and I do!!!)

Due to popular demand, currently our volunteer ushering positions are full. If gaining transferable administrative office and people skills sound good to you, contact Cindy Reid, Managing Director, at 604.251.1766 x 112, or email your resume to cindy@thecultch.com.